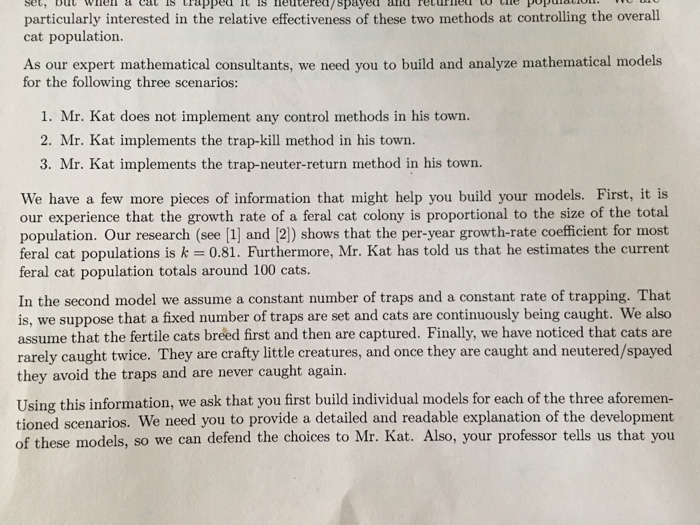 Set, Dut wel cat is trapped It IS Heutered/spayed aid retured o e ppuiO particularly interested in the relative effectiveness of these two methods at controlling the overall cat population. ur expert mathematical consultants, we need you to build and analyze mathematical models for the following three scenarios: 1. Mr. Kat does not implement any control methods in his town. 2. Mr. Kat implements the trap-kill method in his town. 3. Mr. Kat implements the trap-neuter-return method in his town We have a few more pieces of information that might help you build your models. First, it is our experience that the growth rate of a feral cat colony is proportional to the size of the total population. Our research (see [1] and [2]) shows that the per-year growth-rate coefficient for most feral cat populations is k = 0.81. Furthermore, Mr. Kat has told us that he estimates the current feral cat population totals around 100 cats. In the second model we assume a constant number of traps and a constant rate of trapping. That is, we suppose that a fixed number of traps are set and cats are continuously being caught. We also assume that the fertile cats breed first and then are captured. Finally, we have noticed that cats are rarely caught twice. They are crafty little creatures, and once they are caught and neutered/spayed they avoid the traps and are never caught again. Using this information, we ask that you first build individual models for each of the three aforemen- tioned scenarios. We need you to provide a detailed and readable explanation of the development of these models, so we can defend the choices to Mr. Kat. Also, your professor tells us that you

As per the afore mentioned question,

the current population of feral cats = 100

Growth rate coefficient per year is given as k = 0.81

It is given that Growth in cat population is directly proportional to the current population size, i.e.,

In the absence of traps,

This growth would continue in the town without any control method. The equation of growth would be as follows:

If you set 25 traps and are assuming a trapping rate of 100 in a day, then the whole cat population will be wiped out or infertile in 4 days. This is because to give birth to a new cat it takes 4.5 days.

A critical number would be to set 1 trap with a trapping rate 0f 1 cat in 4.5 days. In this case, if we are killing the caught cat, then the number of cats will remain constant that is at 100. However, if we are making it impotent the cat population will continuously increase at the of 0.81 until the rate starts reducing.