(Solved Homework): Semester Programming Project This program should illustrate and simulate the ethical issue of the tragedy of the commons. In essence, it is a

This program should illustrate and simulate the ethical issue of the tragedy of the commons. In essence, it is a software toy that permits users to examine the balance between choices that benefit the individual but cost society versus those that benefit society at a cost to the individual.

The program can be written in either Java or C. Students have broad discretion with regards to implementation.

Please consider creating an array (or linked list) of objects. Each object might have an integer ID, a Boolean switch (selfish or not-selfish), and a happiness score (integer). Then use the object in part A. Finally, implement part B representing the society.

The first part of the program will create a series of individuals (objects) who make decision that are either selfish or altruistic. Each object will make its decisions independently. Some objects may choose to always be selfish. Others will always be altruistic. And some might be random. Each object will have an identity (an integer is sufficient), and can generate its choice. Each object will also have a score for happiness, which can change.

The program should be able to create from 1 to 20 (or more, if you prefer) individuals according to the user’s preference.

The program should be able to run multiple iterations (each with the same individuals), and be capable of up to 20 (or more, if you prefer) iterations, with output for each iteration.

When Part B is done, the government score will be added to the functionality of Part A.

The second part will incorporate an entity called “government”, which will represent the aggregate effects of individual decisions by the individual objects.

If there are an equal number of selfish and altruistic individuals, the government score is a zero.

These results are added to the individual happiness scores specified in Part A.

In contrast, suppose all 20 are altruistic. The government would add 20 points, the individuals would have negative scores as individuals, but the aggregate result is that each would add 18 points to their happiness score.

The government can punish excessive selfishness. If an individual is selfish AND the government score is positive (more altruists than selfish), there is a 10% chance that a selfish individual will receive a punishment – in this case, a penalty of 50 points. Think of it as time in jail.

If an individual is selfish and the government score is negative (more selfish than altruists), there is a 50% chance that a selfish individual will receive a punishment – in this case, a penalty of 75 points. In other words, a long time in jail.

Note: These numbers are purely arbitrary. Feel free to experiment with other numbers!

for(int i=0;i<pObj.li.size();i++)
{
if(governmentScore > 0 && pObj.li.get(i).isSwitchValue() == true) // If an individual is selfish AND the government score is positive (more altruists than selfish)
{
System.out.println(“10% chance of receiving punishment and penalty is 50 points.”); 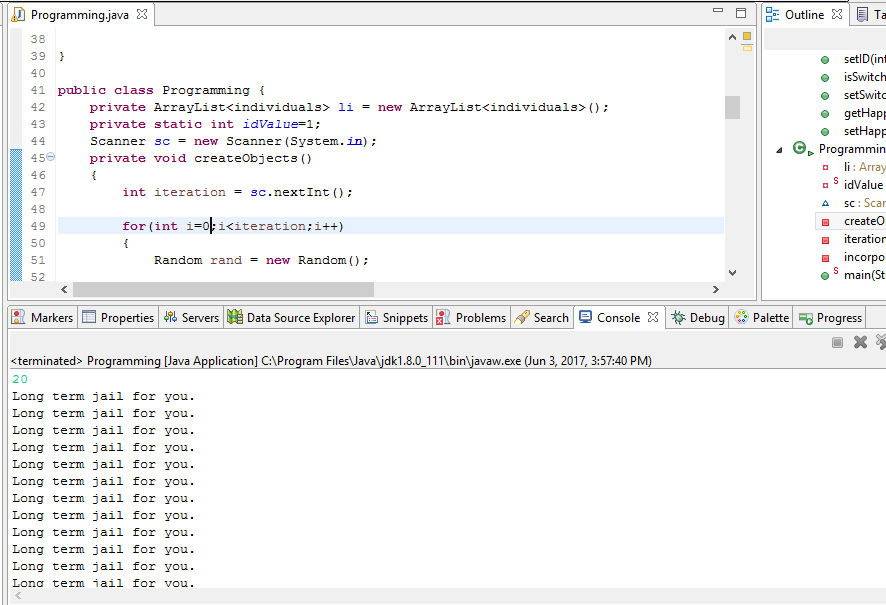