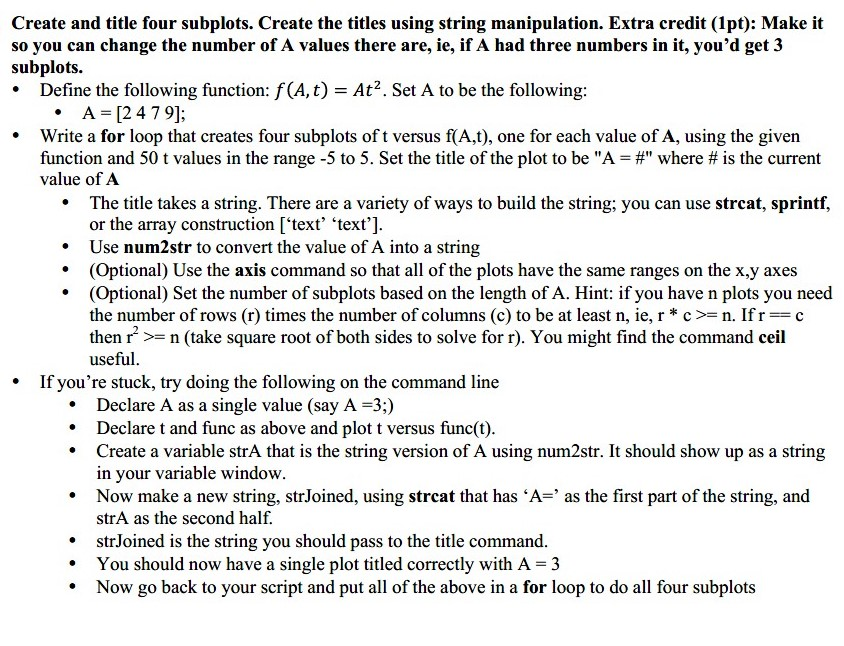 Create and title four subplots. Create the titles using string manipulation. Extra credit (1pt): Make it so you can change the number of A values there are, ie, if A had three numbers in it, you’d get 3 subplots. Define the following function f CA, t) At 2. Set A to be the following: A 12 4791 Write a for loop that creates four subplots of t versus f(A,t), one for each value of A, using the given function and 50 t values in the range -5 to 5. Set the title of the plot to be “A where is the current value of A The title takes a string. There are a variety of ways to build the string; you can use strcat, sprintf, or the array construction text’ ‘text’] Use num2str to convert the value of A into a string (Optional Use the axis command so that all of the plots have the same ranges on the x,y axes (Optional) Set the number of subplots based on the length of A. Hint: if you have n plots you need the number of rows (r) times the number of columns (c) to be at least n ie, r c n. Ifr c then r n (take square root of both sides to solve for r). You might find the command ceil useful If you’re stuck, try doing the following on the command line Declare A as a single value (say A 3,0 Declare t and func as above and plot t versus func(t) Create a variable strA that is the string version of A using num2str. It should show up as a string in your variable window. Now make a new string, strJoined, using strcat that has “A as the first part of the string, and str A as the second half strJoined is the string you should pass to the title command. You should now have a single plot titled correctly with A 3 Now go back to your script and put all of the above in a for loop to do all four subplots

% MATLAB code to create titles and subplots. Titles are 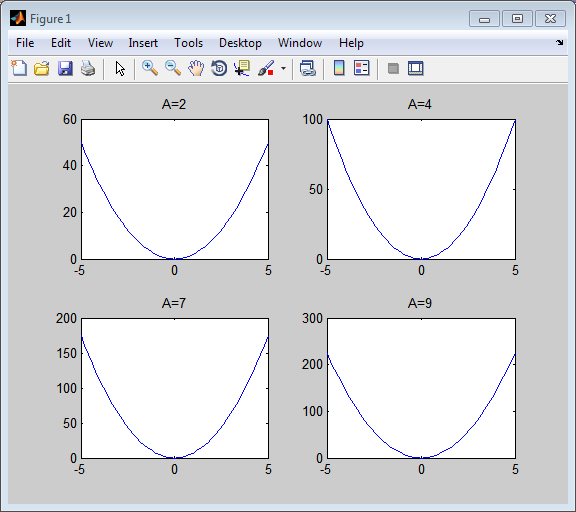