(Solved Homework): Create an initial post in which you explain how data structures are used in an operating system and if you would use 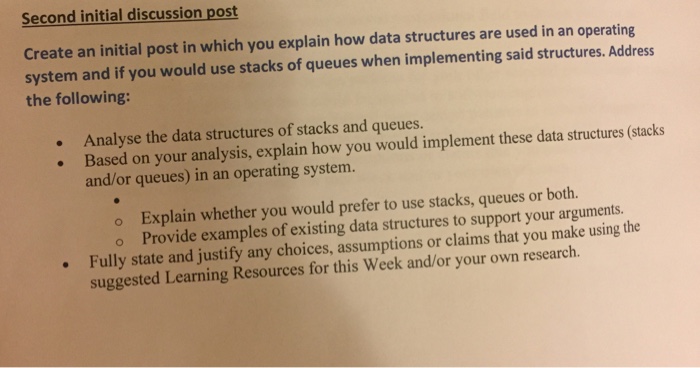 Data structures are used as part of storing information in kernel

The operating system must keep a lot of information about the current state of the system. As things happen within the system these data structures must be changed to reflect the current reality. For example, a new process might be spawned when a user logged into the system. The kernel must create a data structure representing the new process. The scheduler can then use it if it decides to schedule that process to run when it is its turn.

Data structures are also used in designing file systems Many file systems use some sort of bit vector (usually referred to as a bitmap) to track where certain free blocks are, since they have excellent performance for querying whether a specific block of disk is in use and (for disks that aren’t overwhelmingly full) support reasonably fast lookups of free blocks.

The XFS file system was famous for using B+-trees for just about everything, including directory structures and its journaling system. From what I remember from my undergrad OS course, the philosophy was that since it took so long to write, debug, and performance tune the implementation of the B+-tree, it made sense to use it as much as possible.

Other file systems (ext3 and ext4) use a variant of the B-tree called the HTree that I’m not very familiar with. Apparently it uses some sort of hashing scheme to keep the branching factor high so that very few disk accesses are used.

Stack is an ordered list of similar data type.

Stack is a LIFO structure. (Last in First out).

push() function is used to insert new elements into the Stack and pop() is used to delete an element from the stack. Both insertion and deletion are allowed at only one end of Stack called Top.

The simplest application of a stack is to reverse a word. You push a given word to stack – letter by letter – and then pop letters from the stack.

There are other uses also like : Parsing, Expression Conversion(Infix to Postfix, Postfix to Prefix etc) and many more.

Below mentioned are the time complexities for various operations that can be performed on the Stack data structure.

Stack can be easily implemented using an Array or a Linked List. Arrays are quick, but are limited in size and Linked List requires overhead to allocate, link, unlink, and deallocate, but is not limited in size. Here we will implement Stack using array.

Queue, as the name suggests is used whenever we need to have any group of objects in an order in which the first one coming in, also gets out first while the others wait for there turn, like in the following scenarios :

Queue can be implemented using an Array, Stack or Linked List. The easiest way of implementing a queue is by using an Array. Initially the head(FRONT) and the tail(REAR) of the queue points at the first index of the array (starting the index of array from 0). As we add elements to the queue, the tail keeps on moving ahead, always pointing to the position where the next element will be inserted, while the head remains at the first index.

Which one is better :

It depends on the task that is to be performed.

Stack works on the principle of Last In First Out (LIFO). It is a recursive data structure. The simplest application of a stack is to reverse a word. You push a given word to stack – letter by letter and then pop letters from the stack. Another application is an “undo” mechanism in text editors. This operation is accomplished by keeping all text changes in a stack.

Queue is a linear collection of objects. Unlike stack, in queue, we remove the object that is least recently added. It works on the principle of First In First Out (FIFO).

The applications of both these implementations of the data structures are different.