ANSWER the following QUESTION .
#1. Background note: A born-again Texas businessman and a television evangelist smashed $1 million worth of art objects and threw them into a lake after reading the following verse from Deuteronomy in the Bible: “The graven images of their gods shall ye burn with fire: thou shalt not desire the silver and gold that is on them, nor take it unto thee, lest thou be snared therein: for it is an abomination to the Lord thy God.” The objects, which belonged to the businessman, were mostly gold, silver, jade, and ivory figures associated with Eastern religions.
Cecil: That’s a real measure of faith, the willingness to discard earthly treasures out of spiritual conviction.
Ellie: It’s more like an act of lunacy. It’s a terrible waste of wealth. If he’d wanted to express his religious conviction, he could have done something to help his fellow human beings.
Cecil: By doing what?
Ellie: He could have sold the objects, taken the million dollars, and given it to the needy of the world. Or he could have donated it to a religious organization or a hospital. Instead, he threw it away and helped no one.
Cecil: You don’t understand. Selling the objects would have corrupted others. He’s a religious man. The Bible told him what to do, and he had no choice but to obey. 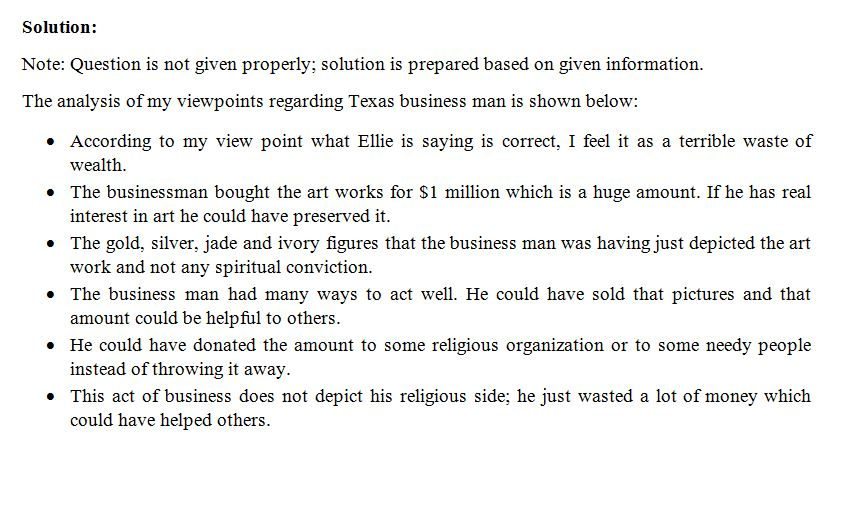