(Solved): 18. During 2014, investigations discovered that man- agers of hospitals

18. During 2014, investigations discovered that man- agers of hospitals serving military veterans, called VA Hospitals, were maintaining secret waiting lists of patients trying to get appointments. These lists were kept secret because managers were rewarded with bonuses if the official waiting list was short, which suggested that veterans were receiving prompt attention. The reality was that many veterans waited inordinately long times to get appointments to see a doctor. Reportedly, this led to many veterans dying from a lack of rapid medical care and detection.

a. Do you think that any of these hospital man- agers would have directly killed a patient to collect bonus money?

b. If your answer to the preceding question is “probably no,” why do you think that these hospital managers engaged in this practice? 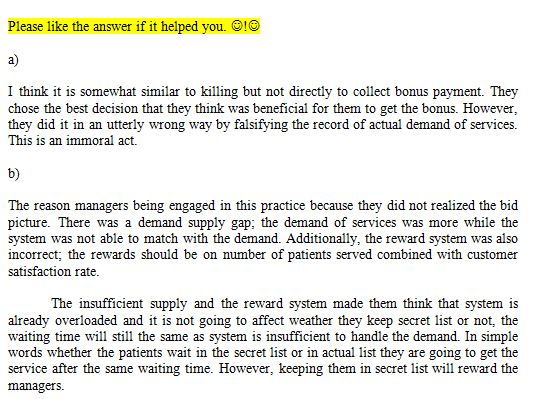