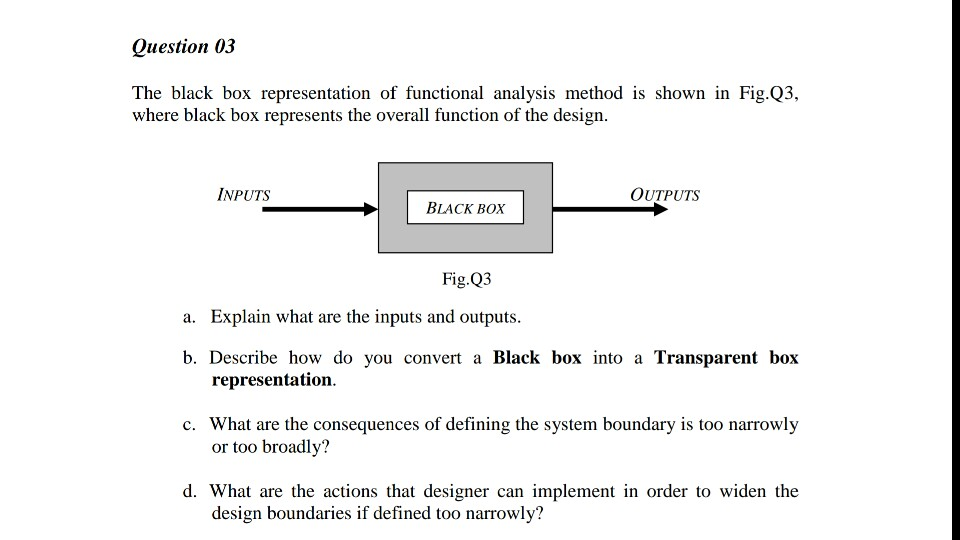 Question 03 The black box representation of functional analysis method is shown in Fig.Q3, where black box represents the overall function of the design INPUTS OUTPUTS BLACK BOX Fig.Q3 a. Explain what are the inputs and outputs b. Describe how do you convert a Black box into a Transparent box representation What are the consequences of defining the system boundary is too narrowly or too broadly? c. d. What are the actions that designer can implement in order to widen the design boundaries if defined too narrowly?

A black box representation is a system where objects can be viewed in the terms of the inputs and outputs and do not have any knowledge of the internal working and thus the implementation is opaque.
a. Every system has one or more inputs and one or more output. The black box represents the system or device, and the inputs represent the input to the system, output represents the output from the system after coming out of the black box.
b. A transparent box is a kind of system where the internal working and internal structure of the application is visible rather than just the functionality of the system. Thus we can convert the black box into a transparent box by revealing and looking into the workings and the internal structure of the system when we pass the inputs to the system and when the processing happens and the outputs are generated from the system.
c. The consequences of defining the system boundary too narrowly or too broadly if the system boundary is set too narrowly then many significant issues and points may be missed and inputs maybe missed which can create problems and also if the system boundary is set too broadly, then we will include a lot more than actual values as the input, which will create problems too.
d. The actions that the designer can implement so as to widen the design boundaries are defined too narrowly are that the designer can set the input boundaries as such that wider inputs and variables are accepted into the system to be processed and recognized in the output. We need to slowly propagate towards the widening of the inputs to the application.