(Homework Solution): Question: List references where needed 1. Describe the difference between a process and a thread 2. Which o… 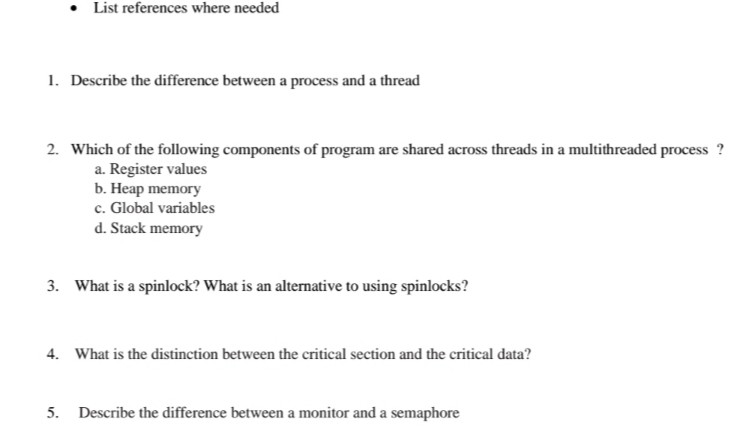 List references where needed 1. Describe the difference between a process and a thread 2. Which of the following components of program are shared across threads in a multithreaded process ? a. Register values b. Heap memory c. Global variables d. Stack memory 3. What is a spinlock? What is an alternative to using spinlocks? 4. What is the distinction between the critical section and the critical data? 5. Describe the difference between a monitor and a semaphore

Another major point which differentiates process and thread is that processes are isolated with
each other whereas threads share memory or resources with each other.

The main key difference between process and thread are below:

All threads of a program are logically contained within a process.

A process is heavy weighted, but a thread is light weighted.

A program is an isolated execution unit whereas thread is not isolated and shares memory.

A thread cannot have an individual existence; it is attached to a process. On the other hand,
a process can exist individually.

At the time of expiration of a thread, its associated stack could be recovered as every thread
has its own stack. In contrast, if a process dies, all threads die including the process.

Global variables are also shared but they are dependent on the platform.

Registers and stacks are specific to their own threads so can’t be shared.

Answer 3)
In a loop a thread waits simply (‘spins’) checks repeatedly until the lock becomes available.

This type of lock is a spin lock. The lock is a kind of busy waiting, as the threads remains active by not performing a useful task.

The spin locks are to release explicitly, although some locks are released automatically when the tread blocks.

The primary disadvantage of a spinlock is that, while waiting to acquire a lock, it wastes time that might be productively
spent elsewhere. There are two ways to avoid this:

Do not acquire the lock. In many situations it is possible to design data structures that do not require locking,
e.g. by using per-thread or per-CPU data and disabling interrupts.

Switch to a different thread while waiting. This typically involves attaching the current thread to a queue of
threads waiting for the lock, followed by switching to another thread that is ready to do some useful work.
This scheme also has the advantage that it guarantees that resource starvation does not occur as long as all
threads eventually relinquish locks they acquire and scheduling decisions can be made about which thread should progress first.
Spinlocks that never entail switching, usable by real-time operating systems, are sometimes called raw spinlocks.

A semaphore is a tool for synchronization and it is used to remove the critical section problem which is that no two
processes can run simultaneously together so to remove this two signal operations are used named as wait and signal
which is used to remove the mutual exclusion of the critical section. as an unsigned one of the most important
synchronization primitives, because you can build many other Decrementing the semaphore is called acquiring or locking it,
incrementing is called releasing or unlocking.

A mutex is a special case of the semaphore and also known as binary mutex it can have only two values minimum of 0 and
maximum of 1, meaning it can be either locked or unlocked. It is used to prevent more than one thread from accessing the
same data while allowing multiple threads to run on it.

A monitor is like a public toilet. Only one person can enter at a time. They lock the door to prevent anyone else coming in, do their stuff, and then unlock it when they leave.

A semaphore is like a bike hire place. They have a certain number of bikes. If you try and hire a bike and they have one free then you can take it, otherwise you must wait. When someone returns their bike then someone else can take it. If you have a bike then you can give it to someone else to return — the bike hire place doesn’t care who returns it, as long as they get their bike back.