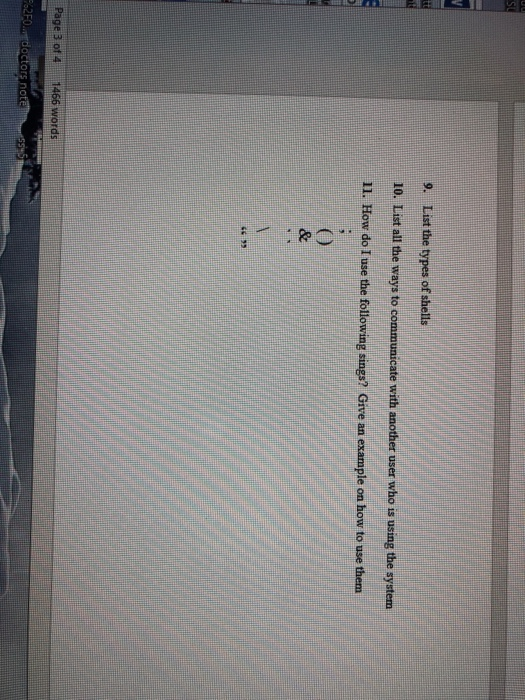 9. List the types of shells 10. List 11. How do I use the following sings? Give an example on how to use thesm all the ways to communicate with another user who is using the system Page 3 of 4 1466 words %2F0

There are various types of shells available in unix. They are listed below:

Bourne Shell is the original Unix shell written by Steve Bourne. It was written in the Bell Labs.

TC shell is available in the public domain. It has all the features of the C shell tand also emacs style editing of the command line.

Korn shell was written by David Korn of Bell labs. It is now provided as the standard shell on Unix systems.

Bash is written by Brian Fox for the GNU Project as a free software replacement for the Bourne shell.

In the system, by default, accepting messages are turned off. This is for the security reasons. You must allow other users to send you message. Use the following command: mesg y

The above command will make the user using pts/1 to see a message “Hello Brother.!!”

The above command will make the user using pts/4 to see the message “Good Mrng Brother.!!”

we can use this command to send a message to all the users.

Everyone using the system will see hello message but they don’t know who sent the message because we use -n flag here. If you remove -n flag, everyone will know that it’s you.

It is used as the command seperator. It seperates various commands in a single line.

Here, the shell waits for each command to terminate.The return status is the exit status of the last command executed.

$(…) means execute the command in the parenthesis in a subshell and return its standard output.

It indicates the command runs in background.

It is used to indicate a string. They are called Strong Quotes.

The output will be ‘a b’ it is a string.

It is called single character quote.

If you want to place text on two or more lines for readability, but the program expects one line, you need a line continuation character, we can use the backslash as the last character on the line:

example: $ echo This is

These are called weak quotes.

We use these to have QUOTES WITHIN QUOTES.

NOTE: Please hit the LIKE button if you like the Solution and appreciate our time. It would really boost us to help you better. If there are any doubts, HIT the LIKE and comment down here.. we are right here to help you.!!!!